An example from Barcelona

Participation, together with interaction, has been a trendy topic in the museum world over the past recent years. It seems difficult nowadays to conceive an exhibition without any participatory element, even though many exhibitions and also websites remain a one-way oriented, museum-public, affair.

This cannot be said of the Centre de Cultura Contemporània de Barcelona (CCCB), which is preparing Global Screen, an exhibition to explore the power of the screen in today’s society. As an interesting feature, CCCB has started to involve the public well before the exhibition opens (in January 2012). Last week it organized a workshop allowing the public to become familiar with the issue and the exhibition itself.

During the first session, members of Telenoika, an “audiovisual creative open community” as they describe themselves, introduced us to the world of Vjing, video attacks and Mapping. The latter consists of video screenings on historic buildings. Check out a few exciting examples of Mapping created by Telenoika. What I found interesting was the re-definition of the screen, mainly understood as forming part of a cinema, TV, computer, mobile, etc. Telenoika deliberately extends the boundaries of the concept projecting on any surface, which can receive videos. 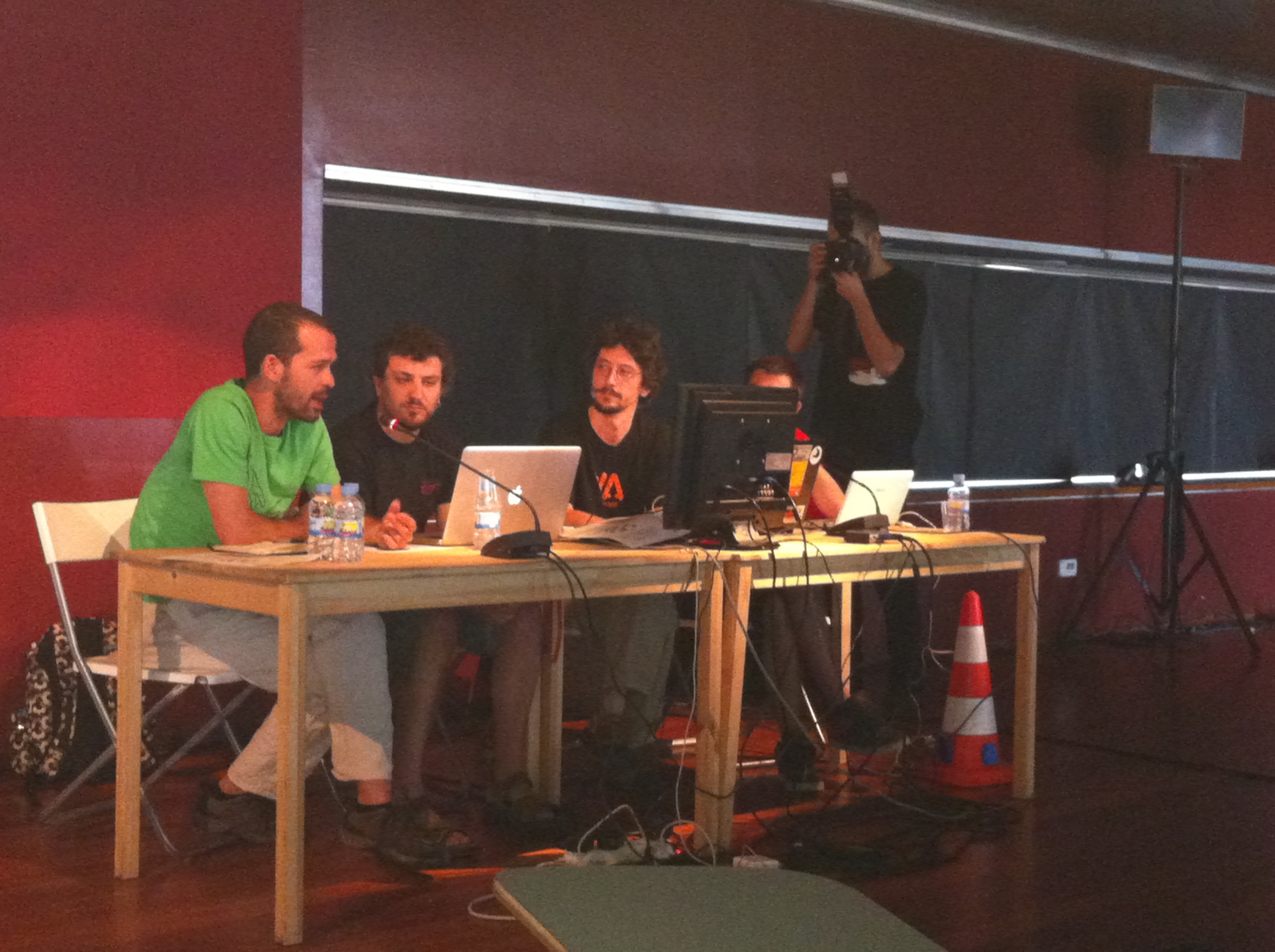 Members of Telenoika between many different screens

In the evening, the two curators Gilles Lipovetsky and Jean Serroy, talked about the seven areas, around which the exhibition will be structured:

CCCB not only allows us to get to know the exhibition areas through their curators, but also launches a main participatory feature: everyone will be invited to send in videos and images related to the seven screens through an online platform starting in October. The process will be managed by the CCCB’s own research and innovation department, CCCBLab, and should culminate in a parallel exhibition, which later will be incorporated in the main exhibition. Through this participation, the users become co-curators of the exhibition.

I find this process most interesting. CCCB has already set up projects where people could send in pictures through an online platform, which then became part of the exhibition, such as The City of Horrors and the current online project: Brangulí was here. What about you?

It might have been the good experiences with these projects that led CCCB to go one step further in the case of Global Screen, involve users at an earlier stage and give them even more weight within the exhibition.

I only hope that users do not get tired of so much participation. It would be interesting to know if many people repeat participation and to what extent a different project is capable of capturing new users, and new visitors. Statistics, if well run and cared of, will tell us.

In any case, I’ll get my camera out, ready for participation.

We love eating cookies and also use them on this website, but just to track visits. We store no personal details. AcceptNo, thanks

This website uses cookies to improve your experience while you navigate through the website. Out of these, the cookies that are categorized as necessary are stored on your browser as they are essential for the working of basic functionalities of the website. We also use third-party cookies that help us analyze and understand how you use this website. These cookies will be stored in your browser only with your consent. You also have the option to opt-out of these cookies. But opting out of some of these cookies may affect your browsing experience.
Necessary Always Enabled
Necessary cookies are absolutely essential for the website to function properly. This category only includes cookies that ensures basic functionalities and security features of the website. These cookies do not store any personal information.
Non-necessary
Any cookies that may not be particularly necessary for the website to function and is used specifically to collect user personal data via analytics, ads, other embedded contents are termed as non-necessary cookies. It is mandatory to procure user consent prior to running these cookies on your website.
SAVE & ACCEPT